A short YNFG about an adult named Sewa
who's moving away with their friends.

After 3 long years, Reach is finally in 1.0
Discover all there is to find.
4 Friends
6 Effects
14 Tapes
2 Endings


Updated Walkthough:
Walkthrough is in the file under a .txt file called 'walkthrough'.

Highly recommended! Not only is it a competent Yume Nikki fangame, it also doesn't feel like Yume Nikki (in a a good way). Here's part one of my playthrough, if anyone's interested:

Good visuals, good atmosphere, and fun to explore. I really like how this game has it's own unique universe, which makes it stand out from other Yume Nikki-esque games while still retaining the tone and mechanics. It's an excellent example of how "good artists borrow, but great artists steal".

My only gripe is that it felt like there were too many dead-ends, so the world doesn't feel as interconnected as it could be. Maybe there were more, but I only found two fast travel points. As far as I know, there also isn't the classic "return to the hub world" power (maybe I missed it somehow?). It's only apparent, however, when you're like me and want to find all the secrets such as the audio tapes, so you end up backtracking a lot.

Anyways, great game! I'll be looking forward to the next project from the developer!

I've only spent a little while playing this game. I am a huge fan of horror rpg maker games, and an even bigger fan of Yume Nikki and the creative games that have come from it's inspiration. I can say however, that Reach is by far one of the most eye catching in visuals, effects, and even unique mechanics. I am certain this is going to be one of my favorite YN inspired games of all time. Outstanding work!

Very fresh fangame! Unique and creative, stands out on it's own. Aside from a few missused SFX (ones being louder than others), and a few minor bugs which are usually visual (spider effect on mirrors looks wrong for one example), and the very, and I say VERY secondary characters (Sewa's friend have barely any background or depth, I don't mind but I would prefer that to having new effects any day). I give it a 8/10, very nice!

Here it's me playing it :J

I'm so glad you liked it! I'll try and go back to fix all of those visual bugs as soon as I can but I'm glad you enjoyed it and I'm so excited that you liked it enough to stream it! Thank you so much

no problem, as always great game and fresh, finally smth more unique than a copypaste fangame hehe. Would love to see the other characters a bit more too, they're great!

ifound a minor bug though - when playing as hiru, i can still use the arms effect. if i've checked the computer in the same session, it turns me into the mouse cursor.

I’m having tons of fun with the game so far, but after getting the first ending I couldn’t really find one of the tapes for the second :( It’s the Pool World tape, and I didn’t really understand what the walkthrough meant by ‘the very back wall’- it’d be great if you could tell me what it meant

Regardless, I still really enjoyed the game ! Great work :D

oh! you use the arms effect to push the pawn up in one of the changing rooms all the way up to the wall in the back!
sorry for wording it weird!

Sorry for the late reply, but tsym !

If you're mentioning the backroom for the ending its connected to Sewas living room, second door from the left on the bottom!

Oh, ok, thank you for answering

I wanted the game to be a bit bigger but still it's amazing!

Thank you so much!!!

As for the size its about what I wanted for the games, nothing too big but just enough to explore for a while

Oh, I love this YNFG! It's dark and  chilly.
However, some bugs confuse me, so I cannot get types:

When I turn small and go into the hole in the sewer, I will be stuck on a oil drum.

Hope the game update in DDJ6!

Thank you so much!!! The game is getting updated in the DDJ6 and hopefully it'll be totally complete! I'll also make sure to get rid of all those bugs that were in the last update

HELLO HELLO!! Really really really love your game!I think I'm close to finishing it yet I can't seem to find the 3rd friend based on the update;; feel really lost so I wonder when you will update the walkthroughPROBABLY SPOILERS AHEAD!!.....I encountered some bugs at the Art/Mirror? Gallery, specially in the area of three-six doors that leads to the same aesthetic set of mirrors. When I get to some of the doors, it brought me to the middle of a mirror and became stuck there. (Luckily, I have saved before entering so but really worried for some ppl who hasn't saved from that point of the game).Next is the portal from the Sewer to Water world. Upon exiting the water world, I could literally walk through everywhere in the sewer but I couldn't access the exits except for the ladder leading to the Smoke World. I could still walk through everywhere in the Smoke World but I didn't try to take any risks to crash the game at that point. Luckily, it went back to normal when I got home in-game!There were areas where I can seem to walk through even though from the looks of it, you shouldn't. I somewhat can walk on the backgrounds in the School World/Cafeteria(?). I think there were more areas that has the same situation but I could only remember that world since an NPC literally walked through the void :sob:There are also some particles/effects that were kept during exploration of the Purple/Cube World going to the Art/Mirror Gallery, and Train world going to home/Scary Apartment(?). Not sure if those were bugs but just in case!I could try to send you some footages or more descriptions through DMs on Twt if you'd like!I'm also looking forward for the V1.0 update for the game! I really love the artstyle and the spritework! Keep up the good work!

THANK YOU!! And so sorry about not updating the walkthrough that's my bad
and absolutely please feel free to dm me the bugs on twitter so I can fix them! thank you so much!! https://twitter.com/Suddenly_Puns/

This game is my favorite of all DDJ fangames! It has so much potential, especially the story! I absolutely love the game and really can't wait for the next update, but oh god where are tape 6 and 10? Could you tell me where or how to find them?

I loved the new update! The new portraits for Sewa are wonderful and art is amazing. Although I got lost here and there a few times, I eventually found a way out. There are almost no bugs but I wanted to point out a rather annoying ladder bug that stops you from going down and makes Sewa use ladder animation when not on the ladder, here is a short video. Keep up the good work!

oh thank you!! that ladder there has been giving me so much trouble
I'll be sure to fix it asap thank you so much
and so glad you enjoyed the update!!!

Loved the game, but I can't seem to find the "water world" described in the walkthrough as it seems to have been moved. Any directions for finding the last friend?

Yes it has been moved! So sorry I haven't updated the walkthrough yet.

If you're lost check around the sewer area for one of the backrooms, that's where the new water connection is.

Apologies for any inconveniences.

And for finding the second friend you'll have to kill the big wiggly man in the smoke world to find the maws and from there you'll be able to continue on to find some of the other new worlds and find the other friend.

Thank you for the help! I did end up finding it on my own. I ran past that area several times and didn't figure to jump in it so maybe make the tiles a bit more distinct so you can tell that you should probably examine this. Loved the game and can't wait for next years update! Hopefully some of my burning questions will be answered! Looking forward to it!

I love the characters and the visuals! Can't wait for more!

I really enjoyed your games - they are amazing! Congratulations on the projects. I would like to know if you authorize me to translate them into Portuguese.

I'm having trouble launching the game, it says missing vl gothic font. What do I do?

I've just looking it up and apparently this is a slightly common issue with VX ace, someone kindly posted a link to a download of the vl gothic font.
https://www.dropbox.com/s/euv6gm3z4mlhmdj/VLGothic-20121230.zip?dl=0

Hopefully this will help!

I really enjoyed this game! The character designs were pretty unique! The worlds to explore were interesting and charming, my favorite being the dock/water/beach area. I really love how you tied in the effects with character design! I'd definitely love to see and explore more of this world you've created. (Especially after finding the bonus room!) I made a video with my commentary and experiences. Keep up the great work!

I can't tell you how happy your video made me, the fact I got to watch you figure out all the parts of the game. It was exactly how I hoped people would react and feel as they played it!!!
(small notes, if you talk to my little sprite in the dev room after the initial conversation you can see a bunch of the concept art, and there's now a walkthrough so you can check and see if there's anything you missed! you honestly did a great job finding most everything though!!! https://yumenikkifg.fandom.com/wiki/%E3%83%AA%E3%83%BC%E3%83%81_(Reach)/guide )

I just went back in the game to talk to your sprite again. Seeing the concept art and hearing you talk about your game is really fascinating! Thanks for letting me know and for the link to the walkthrough! Also thanks for watching the video! :D 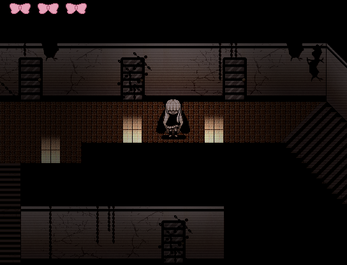 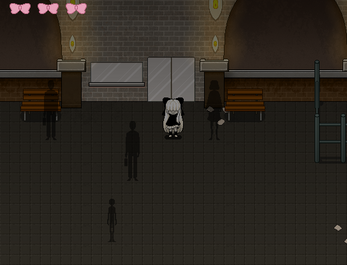 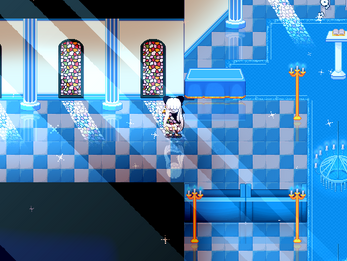 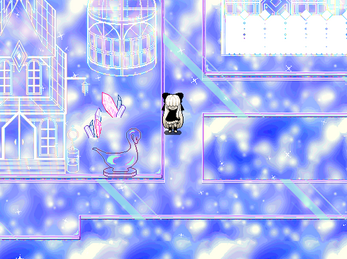 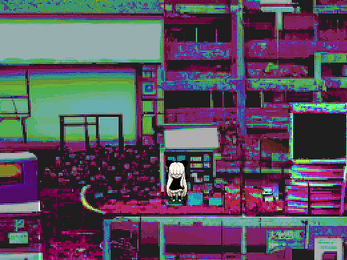